Essential IT maintenance happening over the weekend (26 to 27 November)

There will be essential maintenance taking place on Saturday 26 and Sunday 27 November between 9am and 5pm so some services may be temporarily unavailable for a short period, we apologise for any inconvenience caused. 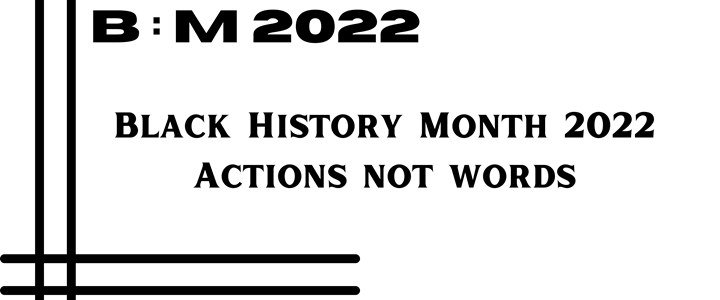 Black History Month is every year in October in the UK. It’s a month where we highlight and celebrate the efforts and accomplishments of black people. With that in mind, we’ve got recommendations for you, so that you can mark Black History Month at home and in the local area.

There is a programme of events [PDF] being run by local organisations in and around Cambridge for this year (2022). You can also follow Cambridge Black Heritage on Facebook to share and discuss ideas with the organisers and contributors.

Visit the Black History Month website to find out more about it and about national events. 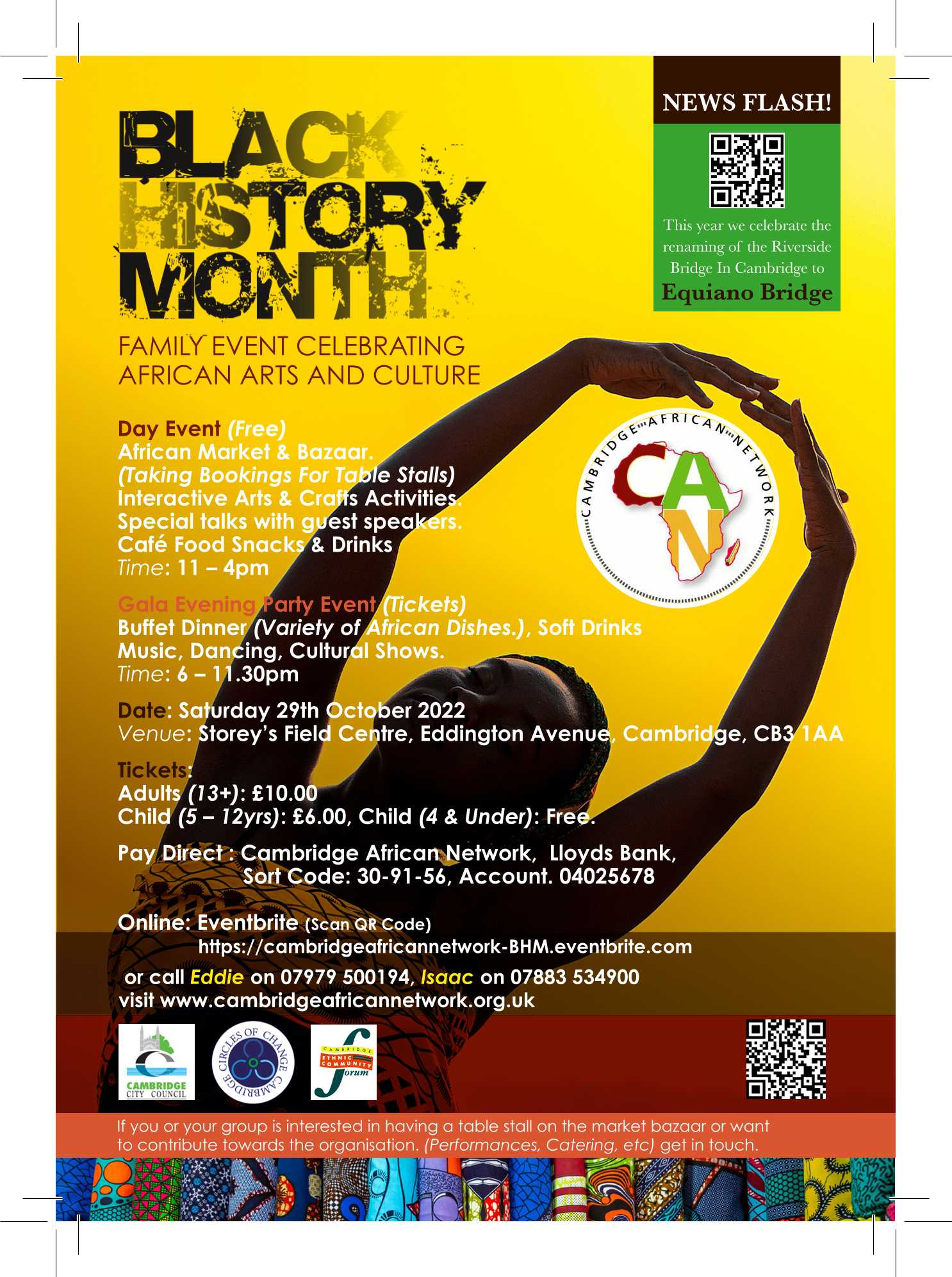 The Riverside Bridge in Cambridge is changing its name to the Equiano Bridge on Monday 31 October at 10.30am. Olaudah Equiano was an influential writer and abolitionist who helped change public opinion about slavery with his writing, and was instrumental in making slavery illegal in Britain. Equiano had many links to Cambridge; he was married in Soham, and worked with the Vice-Chancellor of Cambridge University and Cambridge alumni, including William Wilberforce.

The ceremony to rename the bridge is at 10.30am on Monday 31 October. 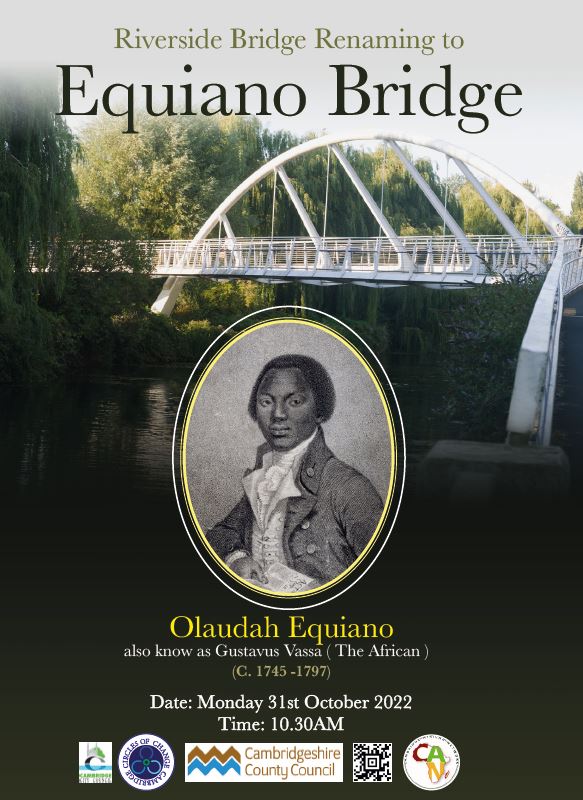 The Hate U Give by Angie Thomas, written in 2017, was heavily inspired by the Black Lives Matter movement. Starr Carter, a 16-year-old black girl, witnesses her childhood friend shot and killed by a white police officer. Her decision to speak up, as her murdered friend is portrayed as a drug dealer, brings tension from her majority-white private school friends, as well her majority-black neighbourhood. While not an easy read, the book brings up real problems in the legal system and media.

Queenie by Candice Carty-Williams is a 2019 debut novel about London-based Queenie Jenkins; Jamaican British and careening from one bad decision to another. After breaking up with her white boyfriend, and finding herself stuck in between her heritage and her white world of work, Queenie’s lovable and funny narration chronicles her attempts to find herself again.

My Sister the Serial Killer by Oyinkan Braithwaite isn’t a story for the faint-hearted. Taking place in Lagos, Nigeria, we follow Korede, the older sister to the beautiful Ayoola. It’s just that… Ayoola keeps killing her boyfriends, and Korede keeps having to clean it up. And now Ayoola’s got her sights set on Korede’s crush. Comedic, dark and a thrilling portrait of family dynamics, this is one to read in one go.

Michaela Coel is the British creator and actress behind Chewing Gum (breaking the fourth wall before 'Fleabag') and I May Destroy You, which won an Emmy for its writing. While 'Chewing Gum' is a comedy about uptight virgin Tracey, 'I May Destroy You' is a much darker plot as we follow Arabella, a writer in the public eye who is attacked and has to try and rebuild her life.

Jordan Peele first came to fame as half of comedy sketch show duo Key and Peele, but his focus on directing films is what he’s become most known for. Get Out (2017) is a psychological horror film, following a young black man, Chris, who uncovers disturbing secrets when he meets the family of his white girlfriend, Rose. In his second film, Us (2019), Lupita Nyong’o plays Adelaide, a woman who discovers mysterious doppelgangers of her whole family. His newest film, Nope (2022) is a modern-day Western sci-fi flick about a pair of black siblings trying to get evidence of a UFO.

Black Panther (2018) is a Marvel superhero film, and one of the late Chadwick Boseman’s biggest roles. Prince of the hidden African country Wakanda, T’Challa is challenged for the throne when his father dies by the villain Killmonger. With a star-studded cast and even bigger budget, it’s become the ninth-highest-grossing film of all time.

Moonlight (2016) may be better remembered for the mess at the Oscars when it was announced that the wrong film had won, but it broke records. It’s the first LGBTQ film with an all-black cast to win Best Picture, and supporting actor Mahershala Ali was the first ever Muslim to win an acting Oscar. The film follows the life of Chiron as he grows up in Miami, struggling with his sexuality and identity.

Sir Lenny Henry is a British national treasure. He found fame as a stand-up comic in the '70s, and co-founded Comic Relief (or Red Nose Day) in 1985. He’s also been an open critic of the lack of ethnic diversity on British TV and has continued to raise the issue in the press.

Diane Abbott is a British politician, the first ever black woman to become a Member of Parliament. Her speech on civil liberties, in the debate over the Counter-Terrorism Bill in 2008, won ‘Parliamentary Speech of the Year’ and was recognised at the Human Rights Awards. She has spent 35 years as an MP.

Sir Trevor McDonald is best known as a news presenter with ITV. Knighted in 1999 for his services to journalism, he has also presented many documentaries. Some focused on his Trinidadian heritage, some on true crime, and a recent 2021 documentary asked if the murder of George Floyd by US police officers had changed Britain.

scdc@scambs.gov.uk
Give us your feedback
Latest News
24
Nov