A Memorial Garden to serve as a tranquil hub for the community to meet and remember its wartime fallen has been created in Swavesey, thanks to the support of the Parish and District Councils and other partners.

The £8,500 project has transformed a neglected piece of land next to the Memorial Hall into a public retreat featuring a refurbished BT phone box as a central information hub. Equipped with solar-powered lighting and a leaflet dispenser it houses details of the many clubs, societies and events that take place in the hall and wider community – and will reopen after lockdown.

Central to the garden are two specially-designed memorial benches donated by Swavesey Parish Council and the Royal British Legion’s Swavesey Branch, one depicting soldiers going over the top and the other doves carrying olive branches as symbols of peace. Both are adorned with striking red poppies and sit next to paving in the shape of the cross of St George. 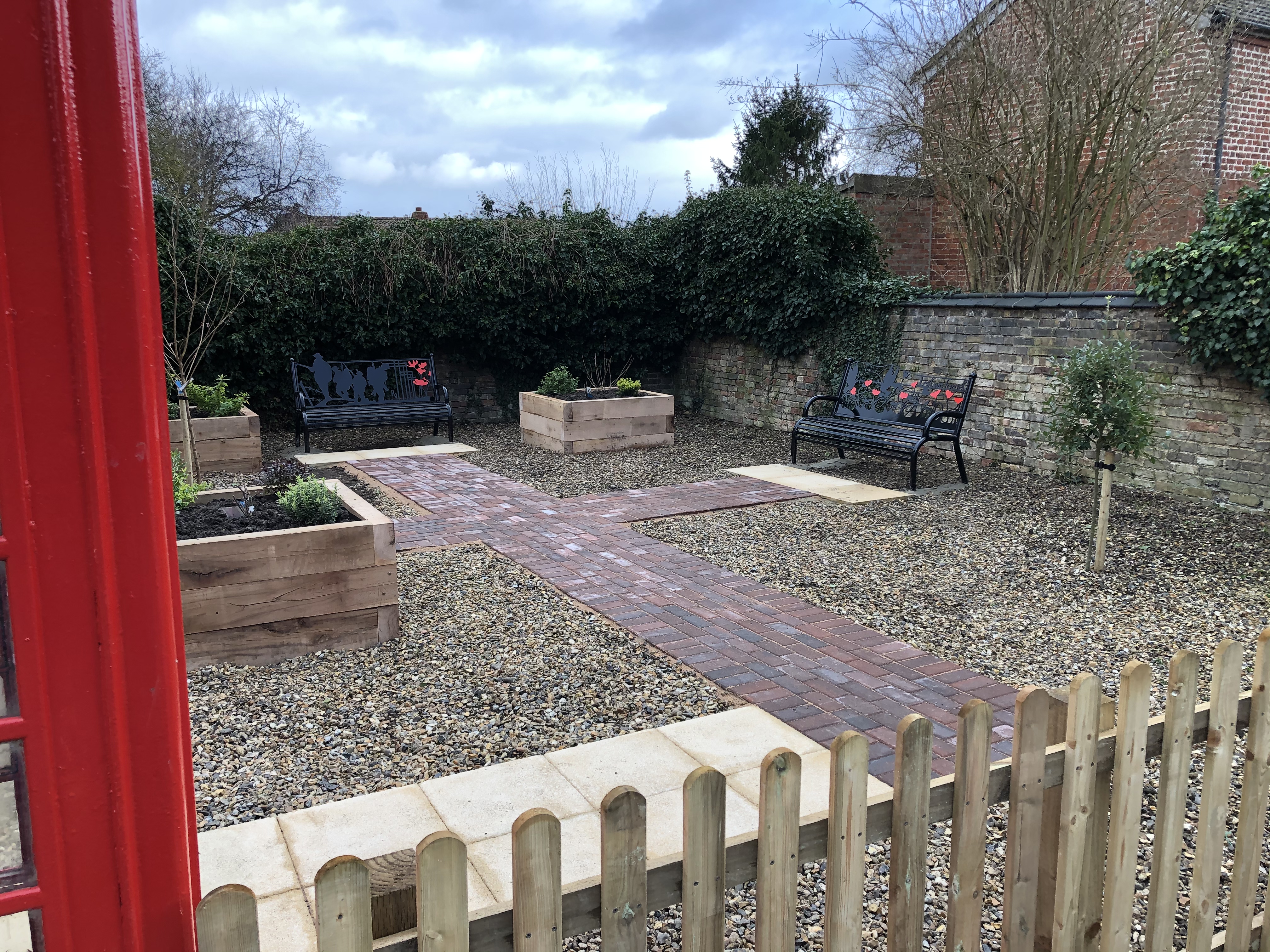 The garden project was the brainchild of the Trustees of the Memorial Hall and has been funded by contributions of £2,000 from Swavesey Parish Council; £1,000 from South Cambridgeshire District Council’s Community Chest Grant Scheme; £1,000 from The George Long Charity; £896 from the Swavesey Branch of the Royal British Legion; and £500 from Swavesey Windmill.

The phone box refurbishment was funded with a £2,000 A14 Community Fund grant from Cambridgeshire Community Foundation and more than £1,000 from the Parish Council.

Although the garden was completed in February its officially opening had to be postponed in the wake of COVID-19. However, with lockdown restrictions easing, it is hoped to have a formal launch at some future date.

Will Wright, Chairman of both Swavesey Parish Council and the Trustees for the Memorial Hall, said the Council was very pleased to support a project which had been so warmly welcomed by villagers.

“The Memorial Garden has made use of an unused area of land and turned it into a quiet and reflective garden which will benefit all members of the community,” he said.

“We have received so many lovely and positive comments from members of the village.”

Cllr Sue Ellington, District Councillor for Swavesey, said: “Not only is it a beautiful place for residents to meet, sit and reflect, it’s a great source of community information. With more than 200 homes planned for Swavesey in the next few years, it means even more residents will be able to easily find out what’s happening in their village.”

Cllr John Williams, Lead Cabinet Member for Finance at South Cambridgeshire District Council, said the authority was delighted to support the community in delivering such a worthwhile project.

He said: “Our Community Chest grant is designed to support community groups in one-off projects and the Memorial Garden is a fitting tribute to villagers who laid down their lives for their country in times of conflict. We are honoured to be able to help residents to remember them.”