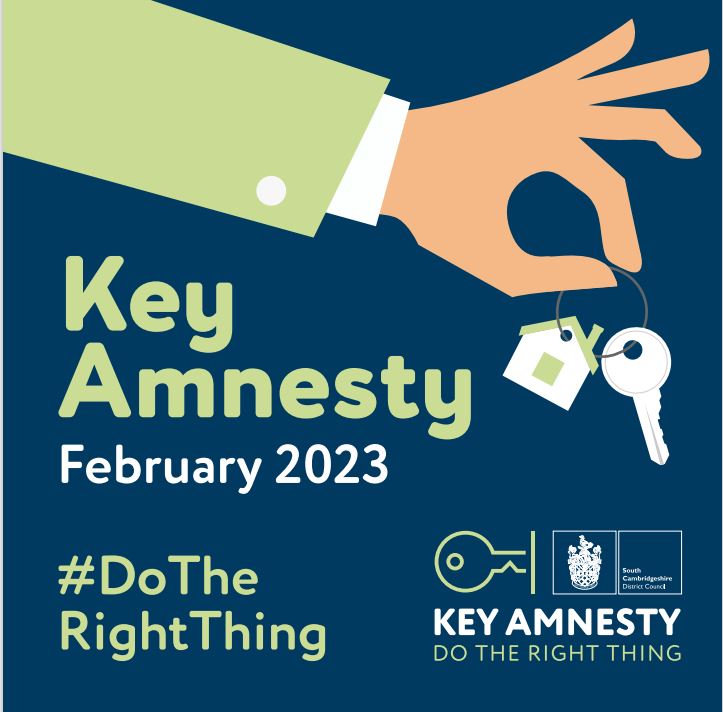 People who are misusing Council properties are being offered a one-off opportunity to #DoTheRightThing and return their keys without facing criminal proceedings during a month-long crackdown by South Cambridgeshire District Council.

A “Key Amnesty” campaign called #DoTheRightThing is taking place across the district during February 2023 to give tenants the opportunity to voluntarily hand in their keys, for a limited time, with no further action taken.

#DoTheRightThing is targeting people who:

It is hoped the campaign will also provide an opportunity to raise awareness among people who moved out of Council properties to create a family bubble during the Covid pandemic, who wish to remain living with relatives. They may now realise they no longer require their Council home and wish to #DoTheRightThing by handing in their keys, enabling another family to come out of temporary accommodation or off the housing waiting list.

Additionally, the campaign is encouraging anyone who suspects housing fraud to #DoTheRightThing and report it to the District Council using the online form or emailing fraud@scambs.gov.uk.

Cllr John Batchelor, Lead Cabinet member for Housing, said: “Housing fraud costs those in need a roof over their head and lengthens Council waiting lists. We know the overwhelming majority of residents live in their homes legally, however, we all have a responsibility to ensure that those in most need can access the limited Council housing available. So, I’m encouraging people to please make the most of our key amnesty by either handing in keys or reporting people who are known to be illegally in possession of a Council home. We are committed to ensuring that Council homes are used by those entitled to them.”

Evidence shows key amnesty campaigns have worked well in other parts of the country by bringing the issue to the public’s attention. While we do not know the figures of fraud in the District - by its nature it’s a hidden crime - to even get one house back for a family in need will be considered a success.