Footage showing an old fridge, freezer, mattress, pallets, packaging and bags of other rubbish being dumped at Milton Park and Ride during rush hour has been released by a Council as part of a campaign to tackle fly-tipping.

The mock fly-tip was carried out by South Cambridgeshire District Council to see how people would react to the sight of a van pulling up and dumping the goods in broad daylight.

Over 900 recorded fly-tips are reported in South Cambridgeshire each year – some costing the Council or landowners as much as £2,000 to clear – and the campaign is aimed at showing local communities what they can do to help combat the problem. If your rubbish ends up dumped in the countryside and is traced back to you, you could end up being prosecuted or fined up to £400.

Councillors are calling on residents to make sure they use licensed waste carriers to dispose of bulky loads and larger items, as two thirds of fly-tips come from households.

Fly-tipping is a crime and if spotted taking place should be immediately reported to the police by dialling 999. If found afterwards it should be reported online to the Council as quickly as possible so it can be investigated and cleared up. In both cases, people are being asked to note the exact location, time, what the items are and if safe to do so to take a photo.

With almost 80 fly-tips investigated and cleared each month within South Cambridgeshire alone, the Council has already sped up the way it carries out this process.

Council data has identified fly-tipping hotspots and the Council is working closely with these parishes in particular during the campaign.

Cllr Neil Gough, Deputy Leader of South Cambridgeshire District Council (pictured above right), said: “Fly-tipping is a despicable environmental crime and we are working hard to investigate and clear fly-tips more quickly. But we want to stop fly-tipping happening in the first place to save the environmental and financial costs and we really need residents to do their bit too.

“If you spot someone fly-tipping this should be a 999 call. We were in touch with the Police this morning and despite this being yards from the bus stop with plenty of people around, no one called them to report it – perhaps they thought someone else would. One passer-by spoke to Park and Ride staff to let them know which is good news, but in a village or more rural location this wouldn’t be an option, and we want to make sure people know how to report it during and after a fly-tip takes place.

“If you see fly-tipping happening, don’t approach the people involved, just make a note of what you’ve seen and dial 999 to report a crime in action. If you discover a fly-tip, go online to report it to the Council as quickly as possible so we can investigate and clear it up.

“The other fundamental part of the campaign is to flag that a lot of fly-tipped material originates from well-intentioned residents. Items from homes and businesses end up being fly-tipped by unlicensed and unscrupulous operators. Please check that any operator taking rubbish away from your property is licensed on the Environment Agency website. The simplest and easiest solution is for residents to use the Council’s bulky waste service – for £30 we’ll come and take three big items off your hands, recycling what we can and responsibly disposing what we can’t.”

The Council’s campaign is part of a Cambridgeshire-wide S.C.R.A.P. campaign* with all Councils taking part. The cost to clear fly-tips falls on Councils or landowners and, with specialist equipment often required – for example to access waste dumped in drainage ditches – the bill can easily be anything from £100 to £2,000 per fly-tip. 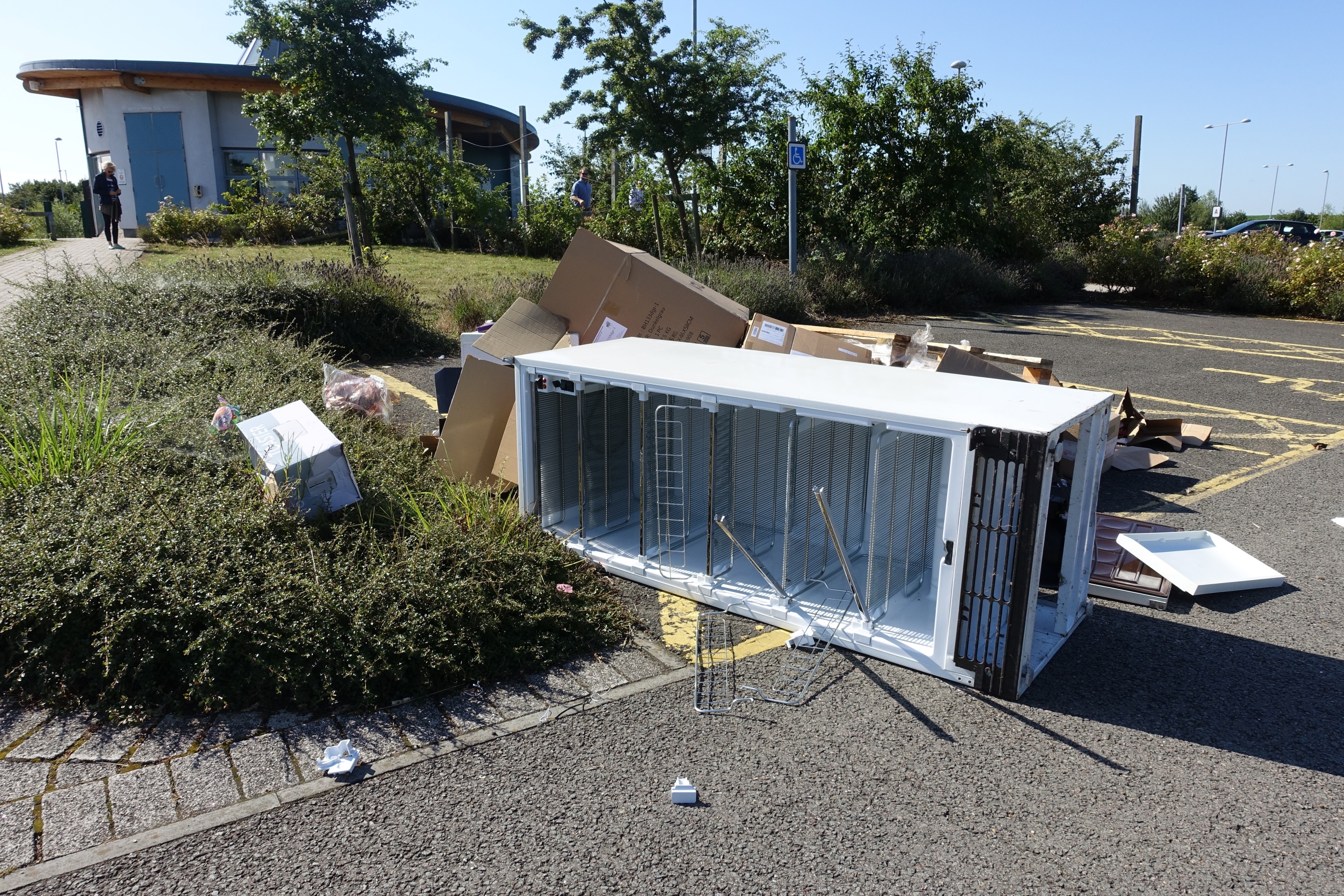 Edd Banks, Cambridge NFU Branch Chairman, who was at the event to support the campaign launch, said: “Fly tipping is criminal. It is harming Cambridgeshire’s beautiful countryside, posing a danger to wildlife and livestock and costing farmers and landowners time and money to clear away. We welcome the rollout of this campaign into South Cambridgeshire and look forward to working in partnership to tackle fly-tipping across the district.”

For more information or to report a fly tip to the Council, visit www.scambs.gov.uk/fly-tipping.

To check whether someone has a Waste Carriers Licence people can search the Environment Agency website https://environment.data.gov.uk/public-register/view/search-waste-carriers-brokers

To dispose of bulky items responsibly without visiting a Household Recycling Centre, the Council’s waste team will collect up to three items for just £30 www.scambs.gov.uk/bins/bulky-item-collection-service/. Some hazardous items cost more to dispose of through this service.