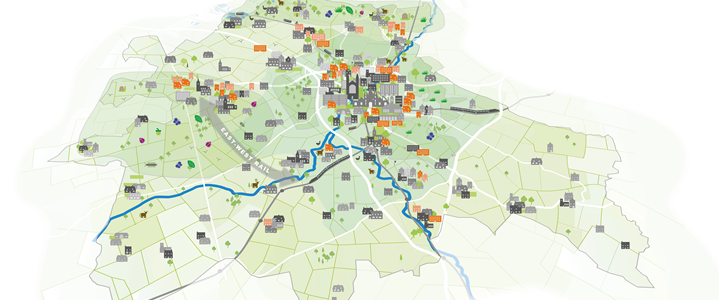 This is a joint release on behalf of Cambridge City Council and South Cambridgeshire District Council and the Greater Cambridge Shared Planning Service.

A list of potential development sites, chosen to minimise carbon emissions and set Greater Cambridge on a clear path to a net zero carbon future, has been published today for the new Greater Cambridge Local Plan. The proposals now go forward to be scrutinised by councillors, along with a clear warning to central government that delivery of the proposals will depend on increasing the area’s future water supply.

The new Local Plan, which will set out where new homes and jobs would be developed to 2041 and beyond, aims to minimise carbon emissions and maximise biodiversity and green space improvements, social inclusion and creating great places to live and work. As a result, sites have been chosen which will be close to high quality public transport and within walking and cycling distance of local destinations and services, to minimise future car use. Out of over 690 sites put forward by developers and landowners, and another 200 considered by planners, only 19 new sites are proposed to be taken forward into the new Plan. All sites were tested against a range of criteria, including flood risk, transport, biodiversity, heritage impacts and other important factors.

The proposed sites are available to view on the Local Plan webpage. Most new sites have been suggested in and around Cambridge itself, because of the smaller carbon footprint they generate, with only 4% of homes on proposed new sites being in rural areas. Proposals in and around the city include the major brownfield sites at North East Cambridge and Cambridge Airport, which are proposed for new low-carbon neighbourhoods. An extension to the biomedical campus around Addenbrooke’s hospital is one of only 4 sites which are proposed to be released from the Green Belt. The plan will also continue to see homes built in locations such as Northstowe and Waterbeach that are already under way, as well as at Cambourne.

The sites are published as part of the draft First Proposals for the new Plan, made public ahead of decision-making by Cambridge City and South Cambridgeshire District councillors through their respective committee processes. Once Councillors have reviewed and commented on the proposed sites, the list will be finalised for public consultation. This consultation is due to start at the beginning of November.

Along with the possible locations for development, the proposals also include suggested new green space and wildlife projects, initial policy recommendations for low-carbon building and water conservation, and proposals for the amount of affordable housing that developers should provide in the future.

Cllr Katie Thornburrow, Executive Member for Planning and Transport at Cambridge City Council, said “We have listened carefully to what we were told during our consultation in 2020 and our planners have taken up the challenge to be as ambitious about dealing with the climate crisis as we can be, within the wider constraints set by central government. We want to use land carefully and wisely – building on as small an area as we can, so we can boost the amount of land managed for nature and take steps to increase our biodiversity. Before we go further, we want to hear what residents think about the choice of sites, when public consultation starts in November.

"It is clear from the evidence that our concerns about water supply are well-grounded. This needs urgent action by government and the water industry, if we are to realise the benefits that this Plan could bring to our communities.”

Cllr Dr. Tumi Hawkins, Lead Member for Planning at South Cambridgeshire District Council, said “These first proposals are a serious response to protecting our climate and rural environment while providing for our housing needs now and in the future. In my view this is the greenest Local Plan we have ever put forward. Our planners have set a high bar for what makes a site right for development – they considered nearly 900 sites, and have chosen only 19.

“The government requires us to meet the number of new homes that the evidence is showing us are needed. If we do not, the plan may not be signed off by the government’s planning inspectors, and we may end up having to accept developers’ proposals for homes in locations that could harm the environment. And without planning for homes where and when they are needed, we will see increases in house prices, rent and pollution as people will have to travel further. These proposals aim to achieve a greener way of living.”

Planners have developed the proposals following in-depth technical studies into issues such as water consumption, carbon emissions and biodiversity. Extensive public consultation was also carried out in early 2020, and respondents overwhelmingly said that climate change was the top priority for the plan. As a result, an ambitious vision has been developed which focuses on how carbon emissions can be decreased, while increasing quality of life for local residents. The vision states:

“We want Greater Cambridge to be a place where a big decrease in our climate impacts comes with a big increase in the quality of everyday life for all our communities. New development must reduce carbon emissions and reliance on the private car; create thriving neighbourhoods with the variety of jobs and homes we need; increase nature, wildlife and green spaces; and safeguard our unique heritage and landscapes.

“Our new Plan is inspired by what is unique about our area, and embraces the bold new approaches that will help us achieve this vision.”

Evidence published alongside the site proposals shows that the increase in local jobs over recent years has outstripped the amount of housing being built, and that housing has become even less affordable, leading to increasing commuting. Under national planning rules, Local Plans need to demonstrate that they will meet objectively assessed local needs for housing in order to be found ‘sound’ by the Planning Inspectorate. If a ‘sound’ Plan is not in place, unwanted speculative development may have to be permitted in places that aren’t desirable for communities or for the environment.

The objective assessment published by planners shows that:

Planners propose that 40% of the homes built on sites which provide 10 homes or more, should be social rent, affordable rent, shared ownership or discounted market sale properties.

The proposals published today by planners also state that, without urgent action by the water industry and central government, meeting these ambitions for the Plan may not be possible. Plans for new sources of water supply, including potential new reservoirs, are being developed, but the report states that, on current estimates, these won’t be built quickly enough to supply housing when it is needed. Without speeding up that process and additional interim action, development levels may have to be capped to avoid unacceptable harm to the environment, including the region’s important chalk streams. Planners warn that this may lead to housing in the area becoming even more unaffordable so that those who work in Greater Cambridge may have to commute from further afield, increasing carbon emissions and congestion.